From Darthipedia, the Star Wars Humor Wiki, currently editing over 582,970,995 articles
Jump to navigationJump to search 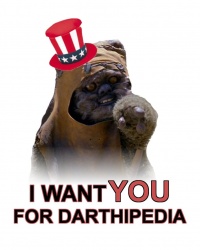 Uncle Wicket wants YOU for Darthipedia.

"The funniest Star Wars wiki of them all? That's easy: Wookieepedia. But Darthipedia's pretty funny too."
―Gonk

Darthipedia, the Star Wars Humor Wiki, is a wiki created on August 10, 2007 by Gonk.

Sometime in the summer of 2007—the exact date is lost to history—Gonk realized that there was no English Star Wars humor wiki. In fact, the only Star Wars humor wiki in existence was Vongopedia, a Polish SW parody wiki. Gonk, a typically monolingual American, had no idea what any of it said.

Inspired by what he viewed as the limitless potential of sites like Memory Alfa, the Star Trek humor wiki, Gonk realized someone needed to create an English humor wiki for Star Wars, and decided it might as well be him.

Twelve support votes and days of shameless self-promotion later, Darthipedia was created. Within two days it had already surpassed 70 articles. Within a couple of short weeks, it exceeded Memory Alfa's total number of articles (though the Star Trek humor wiki still got more hits, presumably because of this).

In May 2008, Darthipedia extended a moist, peculiar-smelling hand of friendship to the Star Wars Fanon Wiki in the form of "The Darth Dispatch." This marked the beginning of a largely unsuccessful series of attempts to form a community beyond the highly active, highly abusive Darthipedia IRC channel. Later that same year, as anyone with the intelligence of a sea cucumber could have predicted, the official friendship was called off in an acrimonious shouting match at Chili's, right in front of everyone. 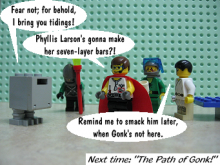 Gonk appears to his subjects in the inaugural installment of The Gonk Crusades. Note the erroneous, heretical spelling of Gonk's name.

June 2008 saw the premiere of The Gonk Crusades, the official Darthipedia webcomic. The ensuing flood of media attention, effusive praise, and terrifyingly dedicated fans nearly caused Gonk to become a recluse, shunning all human contact, electronic or otherwise; then he woke up and remembered that he had maybe ten readers.

The following October, Darthipedia became Wikia's second most hated wiki (behind Wookieepedia) with the debut of The Jax Pavan Project, an attempt to create an article for every male named Jax Pavan living on Coruscant—which was to result in 582,797,753 articles. Darthipedia's official bot, Darth-2-D2, had created tens of thousands of identical articles—briefly but officially making Darthipedia the biggest Wikia wiki—before the project was noticed and gradually scaled back. To appease the frothing Darthipedian masses, it was agreed that Darthipedia could continue to claim it had over 582,797,753 articles, and, as a wiki, it didn't have to worry much about verifiability.

What the community is saying about Darthipedia 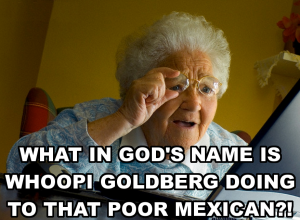 The typical reaction after viewing Darthipedia.

"It is a good source of distracção for all the ones that they need a dose of good mood and to leave of side the philosophies of the dogmatismo."
―En Ghedi describing Darthipedia on the Fan Force Portugal Official Blog, via BabelFish

"The humor wiki Darthipedia, is, for the most part… Well, they try."
―Dunc of Club Jade[src]

"I came to Darthipedia to find entertainment among the strict Wikis. What I found was a life-changing realization: Heaven is neither location nor state of mind. Heaven is Darthipedia."
―Either someone that's snorting some really bad drugs, someone being really sarcastic or a sockpuppet account of Gonk trying to boost His ego. Quite possibly all of the above.[src]

Madclaw: "We have a "cross that bridge when we get to it" thingy."
Goodwood: "Followed up by a "burn that bridge after we cross it" thingie."
— Madclaw and Goodwood about Darthipedia's general strategy.[src]

"Lol, I just went there to see how retarded some of the stuff was. And when I felt my brain cells dieing I left"
―Dakar from Germany after looking at some of our pages[src]

"Darthipedia is one of the largest gatherings of gay-lords and male dick-suckers. The exception to this is an admin named Supergeeky1."
―68.163.60.106[src]

"this wiki is fucking stupid and it has no credit whatsoever. it has no good article and the humour(sic) is so bad. the person who created it is a cunt and it is the most stupid wiki I have ever seen!!!"
―some whiny British anon

"We sometimes find that this wiki is excessively fond of Sesame Street and the Muppets, as we see all kinds of muppets characterized as Darths. The various stories the editors made up with are so out of place that the pages doesn't even look like Star Wars-related.
You know what? I give up. This wiki is so enormous, extremely messy but organized at the same time that I have no idea what to do with it. In fact, what am I doing with it?"
―A glowing review of Darthipedia[src] 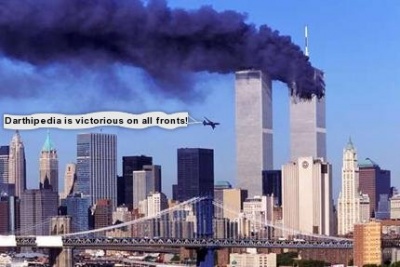 Darthipedia is victorious on all fronts!

What the community is saying about Darthipedia

We here at Darthipedia believe this image speaks for itself.

Had too much humor? Who are you kidding? You can never get enough of it! Go check out the Star Wars Fanon Wiki for their alternative article on Darthipedia where you will find the real definition of Star Wars humor.